One of the major reason for the ever growing popularity of inversion tables in the home fitness market is the huge improvement in the price/performance equation. In fact, Innova ITX 9600 is the perfect example of how that process has worked in the favor of customers. 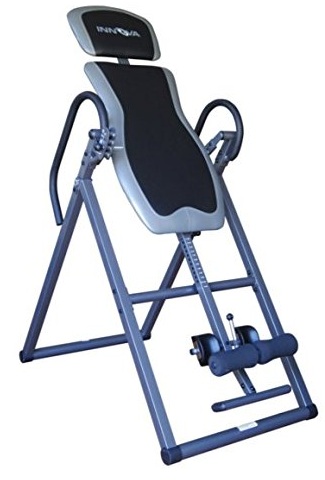 Just few years back, you could end up paying hundreds of dollars for a quality inversion table, and there are so many flimsy products available in the low end market, which made choosing the right product to be very difficult. Moreover, these products often failed to perform with consistent use. But with a cost of less than $100 a piece on Amazon, Innova ITX 9600 is one of the best quality products available at a bargain price.

The biggest reason for choosing ITX9600 are durability and sturdiness, which have been cited almost universally by all those who are happy with this inversion table. With all those characteristics in mind, let’s have a close look at its features and how you expect it to perform in variety of categories, including its features, durability, and ease of use.

The deluxe version of Innova ITX 9600 is made of heavy gauge steel tubing which ensures sturdiness and years of trouble free use.
In addition to performance, the ITX9600 also guarantees you highest level of comfort. It comes with fully padded back rest support, with extra width and length to avoid that “one size fits all” problem that’s so common with many low-end inversion tables on the market.

The ITX9600 has been designed to easily accommodate heights from 4’8”-6’6” making it best for wide range of potential users. The inversion table also has a limit of 300 pounds, which is much higher than 200-pounds limit which is so common in this segment of the market.

Comfort is also the biggest plus point of this particular inversion table. In order to make inversion less stressful, the Innova ITX 9600 is fitted with ankle supports and thick foam rollers on the foot. The handles also have soft touch foam to provide that extra comfort when inverting or returning to the upright position.

The entire inversion process in ITX9600 has been simplified with the use of its special four-position inversion pin that replaces that strap style process which is often used in many low-end inversion tables. With the help of this pin mechanism, its easy for you to pick any one of its four inversion positions, making it super easy for you to choose the right inversion angle.

Some assembly is required with this model, and you should carefully pay attention to its assembly manual and directions.

While Innova ITX 9600 inversion table’s four pin system does make it easy to use, it still lacks some features available with higher end models such as workout DVDs and fitness programs. The table is sturdy enough for you to do most of the exercises contained in these programs (e.g., sit-ups, crunches, etc.), but it also means you will have to go to a separate source to find the necessary workout-related details.

Also, the ITX960 four-pin positioning mechanism has some limitations of use during these exercises. For instance, if you have plans to start with a smaller inversion angle for crunches, you get that ability with expensive units, along with many additional angle choices, but with ITX9600, you can only get a small-angle inversion.

It worth mentioning that these kinds of tradeoffs are common among most low-end inversion tables, so if you’ve decided to buy only a low-cost inversion table, it shouldn’t make Innova ITX 9600 a less desirable or viable than any other table on the market.

You have an option to fold ITX9600, but at 52 pounds the folding process may prove bit cumbersome. Once again, this isn’t unusual with some inversion tables, as most of them require their own space for easy ongoing use in any home gym.

The Innova ITX 9600 inversion table has become widely popular online, and most of the reviews focus on its strength and durability. Most of the reviews reflect satisfied customers, with frequent comments being that it’s a “fabulous product for the price”.

Other complimentary comments by users praise the quality of welds, tuning and construction, with most of these coming from users who’re bit wary of flimsier products. This inversion table is also popular with consumers using it to help deal with back issue and injuries.
While there are few minor complaints about its assembly process, most buyers found instructions easy to understand and follow, with all illustrations being described as helpful.

Many users praised its low price, while others had minor complains about ease of use. The most common being that mechanism to adjust height was slightly difficult to move. In addition, many users described its foot rests as slightly uncomfortable.

All in all, Innova ITX 9600 is one of the best inversion tables on the market that offers you best value for money. Its solid feature set and one-year manufacturer’s warranty ensures complete peace of mind.

You can easily order it on Amazon through Amazon Prime and save more money with its fee two-day shipping.

GET THE LATEST PRICE AND READ CUSTOMER REVIEWS ON AMAZON

With growing health problems such as back and joint problems, the concept of the inversion therapy table is … END_OF_DOCUMENT_TOKEN_TO_BE_REPLACED

Before We start the review, I want to mention a very important fact. Body Power is not sold … END_OF_DOCUMENT_TOKEN_TO_BE_REPLACED

If you already heard about inversion therapy, you probably know what are inversion tables and what are the … END_OF_DOCUMENT_TOKEN_TO_BE_REPLACED